made in
russia
Certificates

ZuluGIS is a framework for mapping, modeling utility networks and developing GIS applications 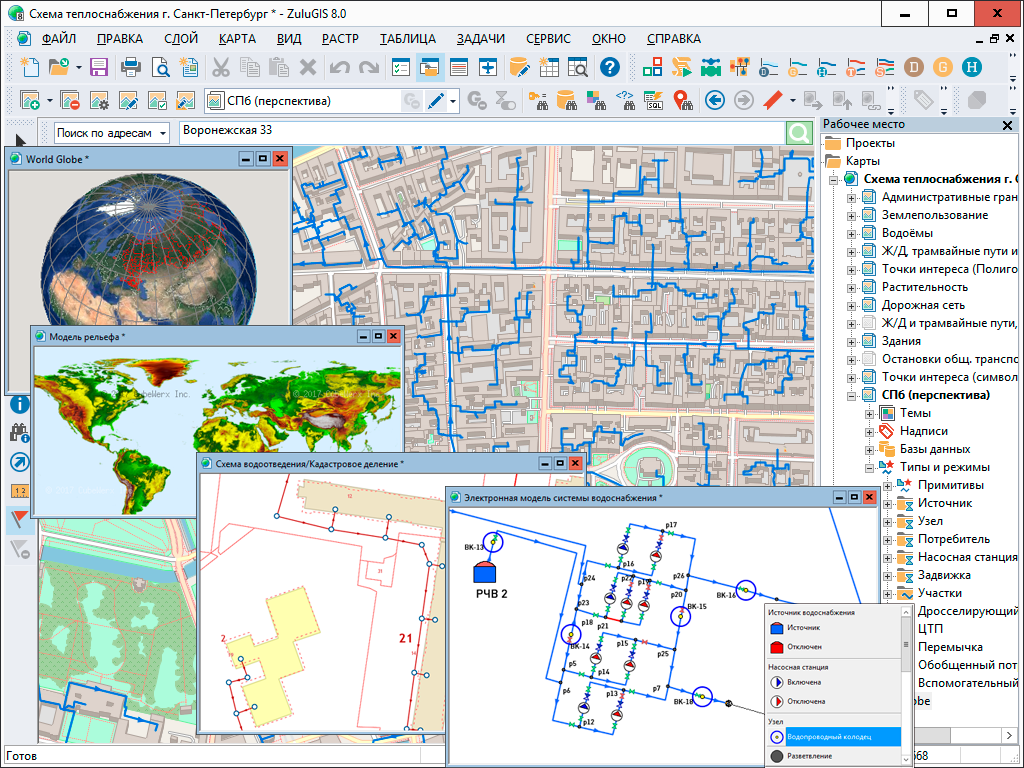 As a geographic information system, ZuluGIS provides the toolset for developing GIS apps that require spatial data visualization in vector and raster formats, analysis of their topology and connection with semantic databases.

What sets ZuluGIS apart is its capacity for creating utility network diagrams with supported topologies. This feature makes it possible to use in-built modules for completing hydraulic calculations and building piezometric graphs.

Geographic information system ZuluGIS can operate as a fully-functional workstation in single-user mode, or as a ZuluServer client in multi-user mode, with all the functionality of the desktop app. 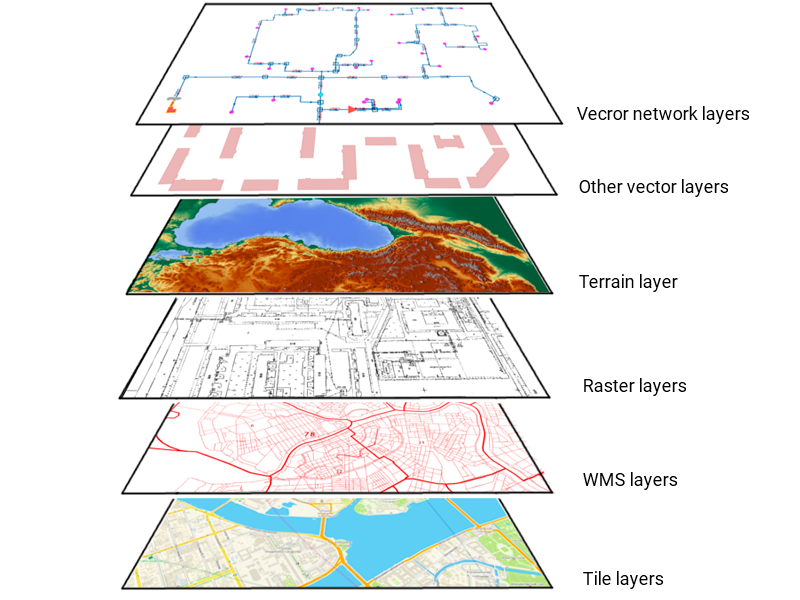 In ZuluGIS, graphic data is organized by layers. The system supports the following types of layers:

Map layers can be located on a computer or, alternatively, on ZuluServer or third-party servers as one or several of their layers, as is the case with WMS and Tiles. 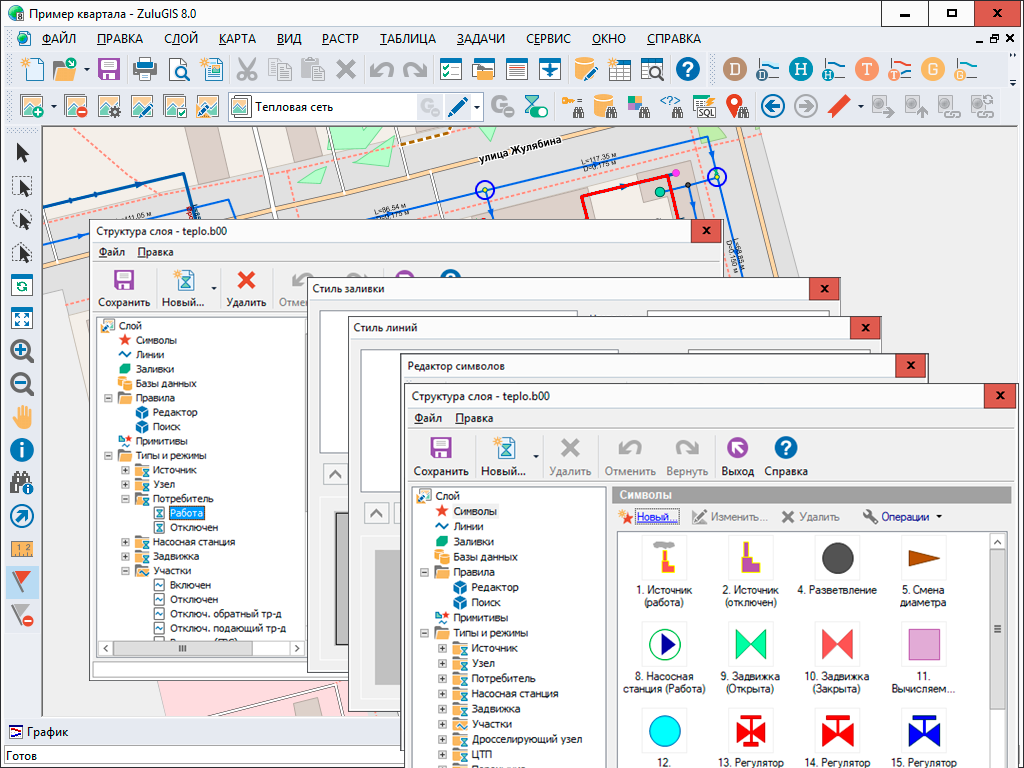 A vector layer may contain objects of different graphic types.

To organize layer data, you can create classifiers that will group vector data according to type and mode. Every data type inside a layer can have its own semantic database.

To georeference raster data, you need to align it to control points manually or in the map popup window. Linked objects can be imported from Tab (MapInfo), Map (OziExplorer) and georeferencing ESRI world files. 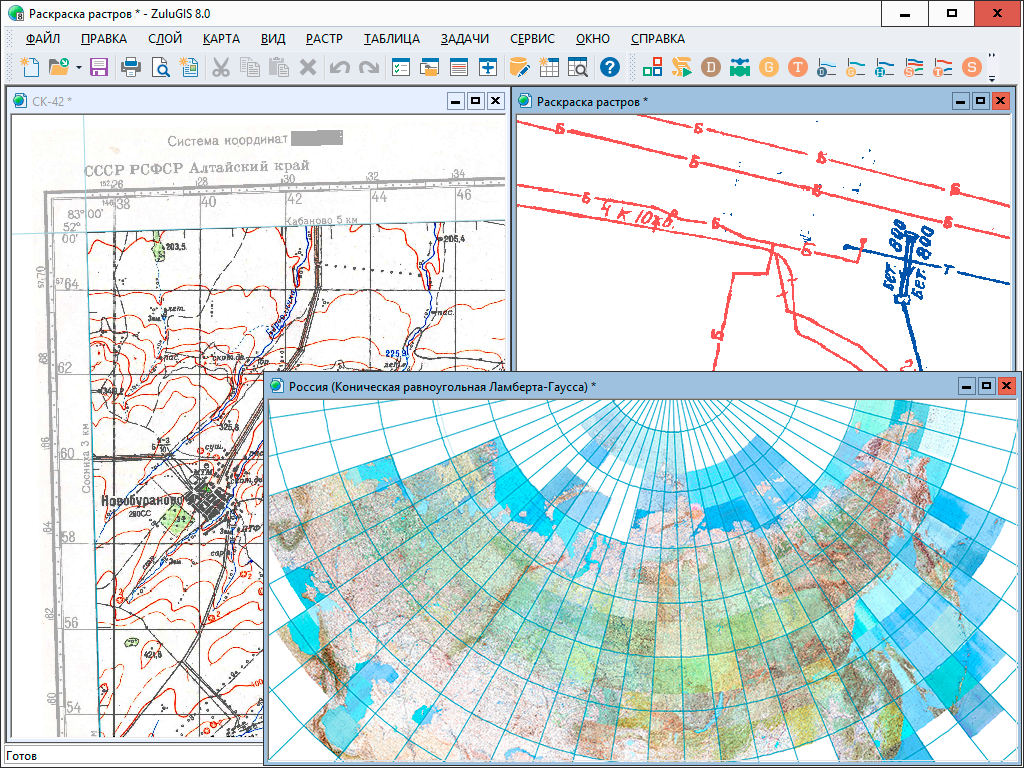 ZuluGIS makes it possible to work with thousands of raster objects simultaneously.

To georeference raster data, you need to align it to control points manually or in the map popup window. Linked objects can be imported from Tab (MapInfo), Map (OziExplorer) and georeferencing ESRI world files.

When displaying raster objects on a map projection, other than the one to which raster data is georeferenced, raster points are re-projected instantaneously. 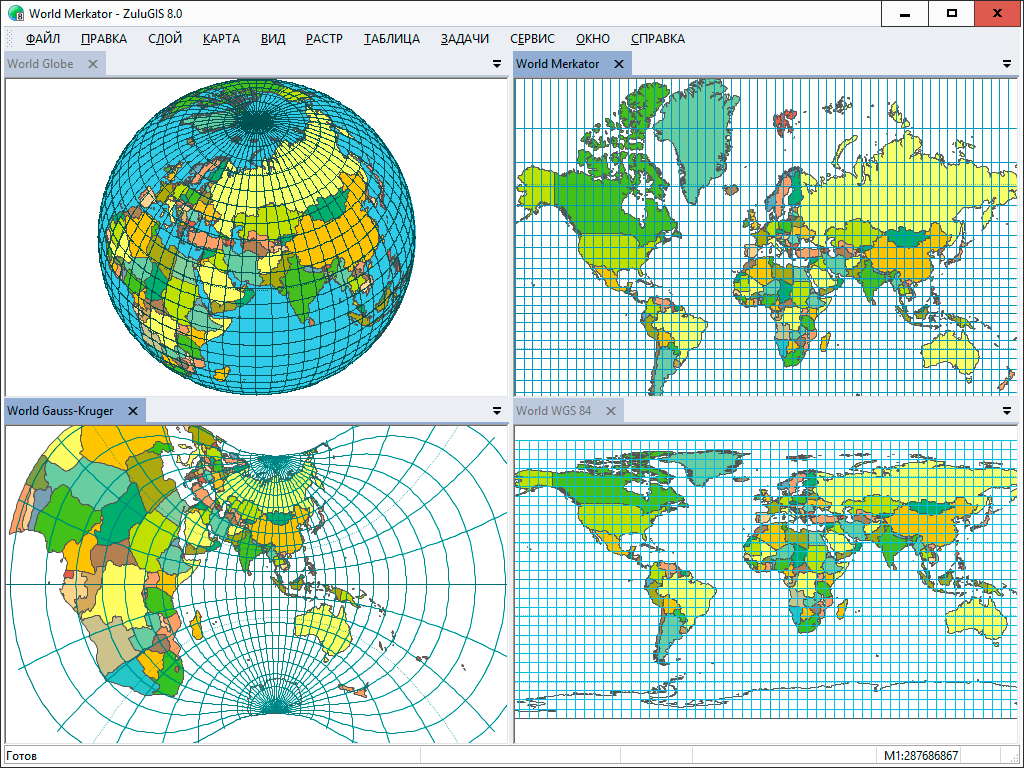 Data stored in different coordinate systems can be displayed on a single map on one of the projections. In this case, if required, coordinates from one datum can be transformed into another datum and from one projection onto another projection directly upon display.

Data can be re-projected from one coordinate system into another. 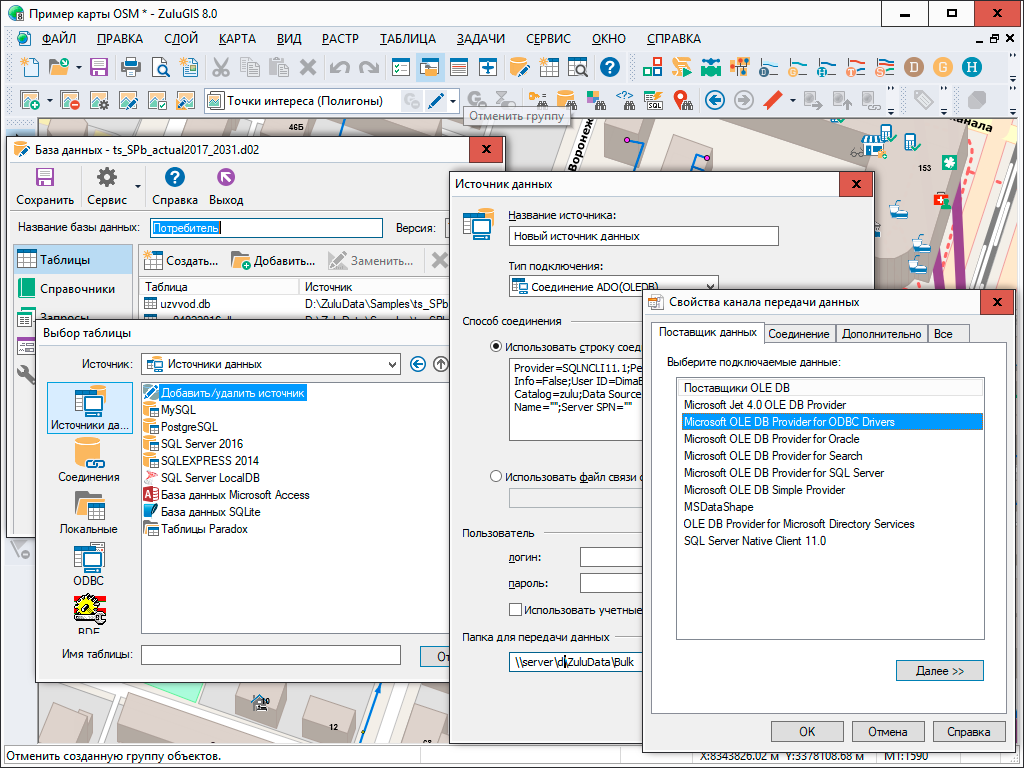 To facilitate access to semantic data, ZuluGIS offers its own ‘data sources’. Similar to ODBC DSN data sources or OLEDB UDL data links, these data sources can be used when adding tables to databases or selecting tables for other operations.

Data sources can be used locally in single-user Zulu app as well as on ZuluServer, where they can be shared with other ZuluServer users. 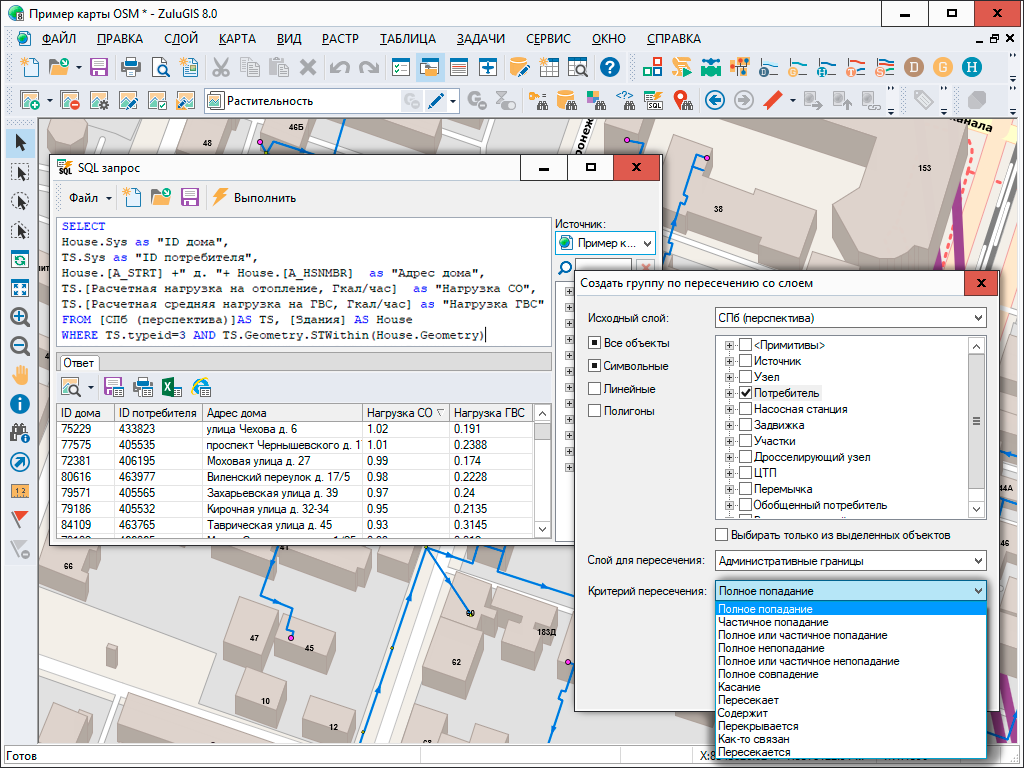 The system enables its users to make random selections of data according to set parameters with an option to highlight objects, save results in tables, and export them into Microsoft Excel.

Spatial queries can simultaneously include both graphic and semantic data related to different layers.

Queries can be formed directly on a map, in popup windows with semantic information, special dialogue-based query generators or as SQL queries using OGC extension. 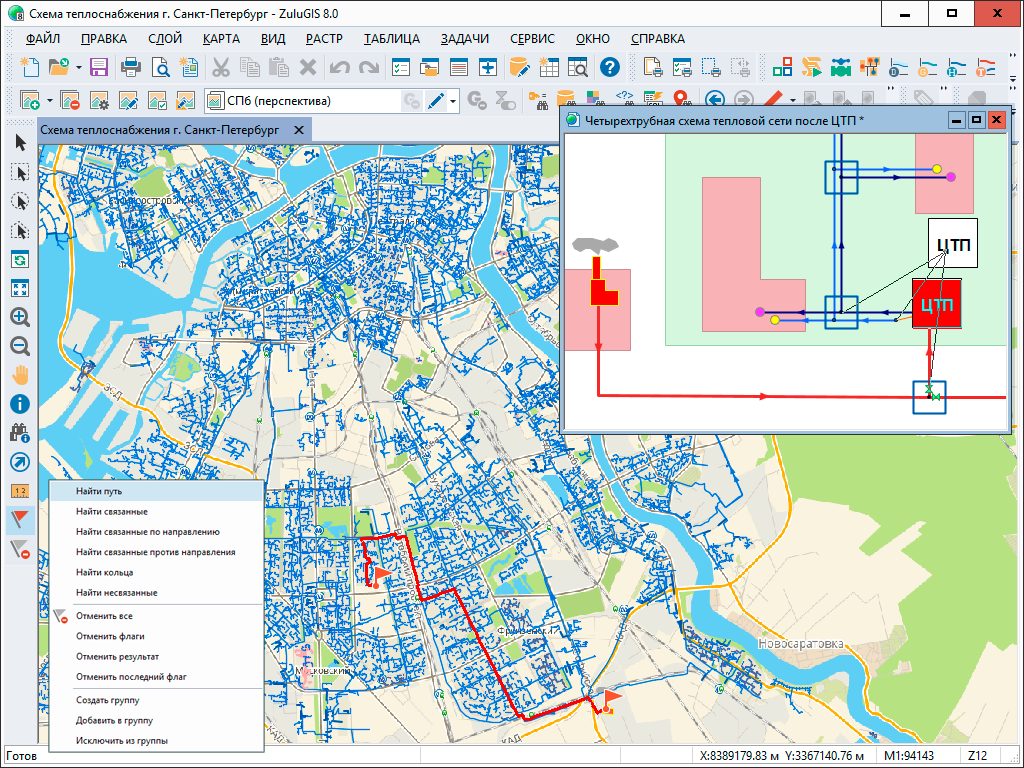 Along with ordinary GIS division of objects into contours, polylines and symbols, ZuluGIS supports linear-nodal topology, which allows users to build models for utility systems and other networks.

By using a network model, you can complete a number of topology tasks, such as discover the shortest path, analyze connectivity, loops and shutdowns, and find shut-off devices. 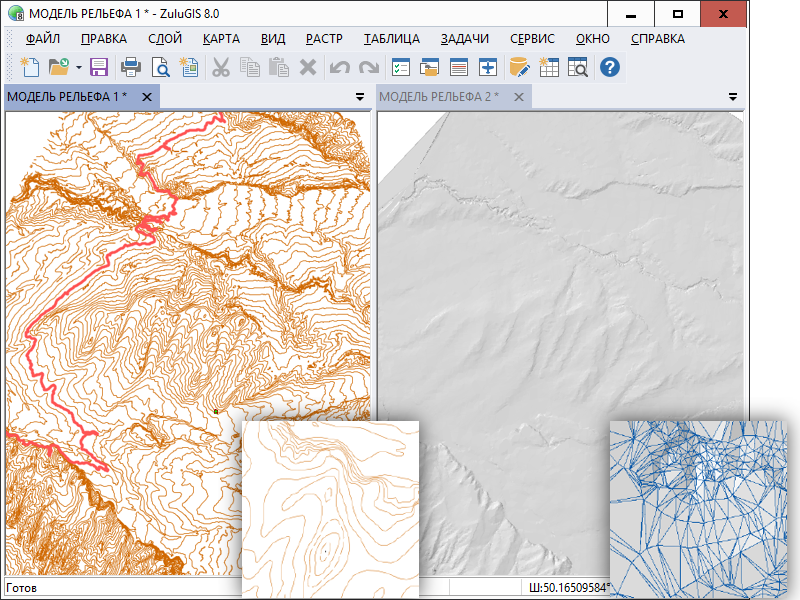 ZuluGIS allows users to build elevation models. Input data for building a terrain model includes layers with contours and elevation points. This data is then used to create a triangulation (a Delauney triangulation, with limitations, taking contours into account), which is saved as a special type of layer (an elevation layer).

Having a terrain model makes it possible to complete the following tasks: 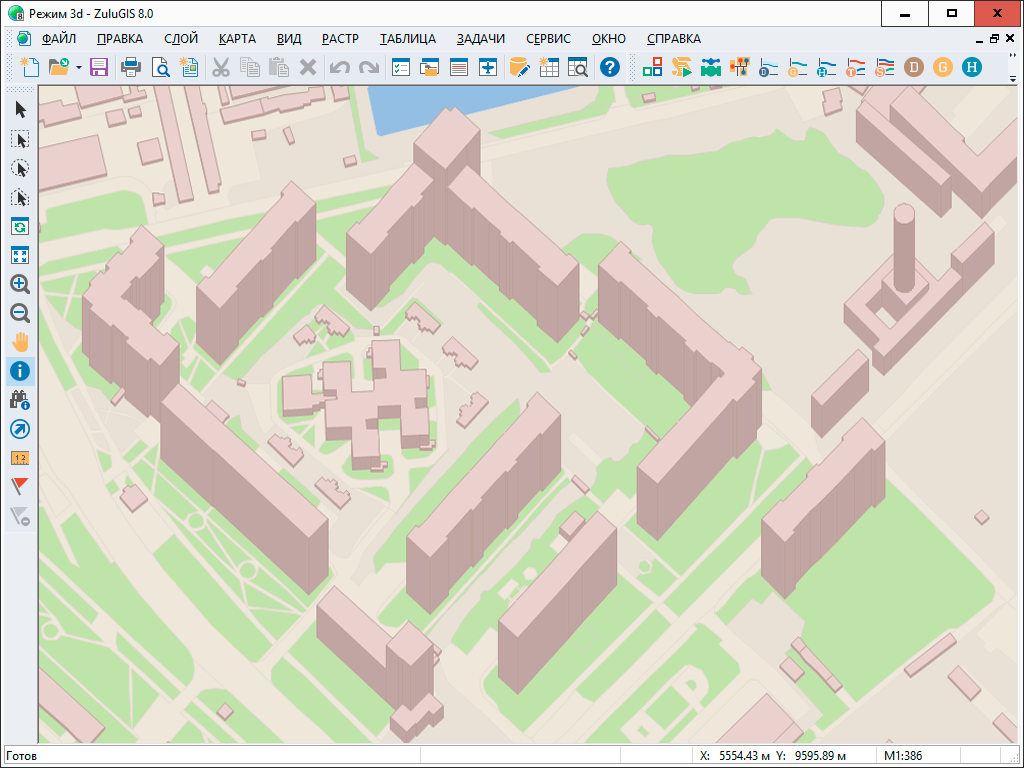 In this mode, polygonal objects are displayed as prisms, whose lateral faces are proportional to a specified height.

To set a height value in meters or number of floors, use an appropriate entry field in the semantic database.

You can adjust object angles, coloration of lateral faces and edges. 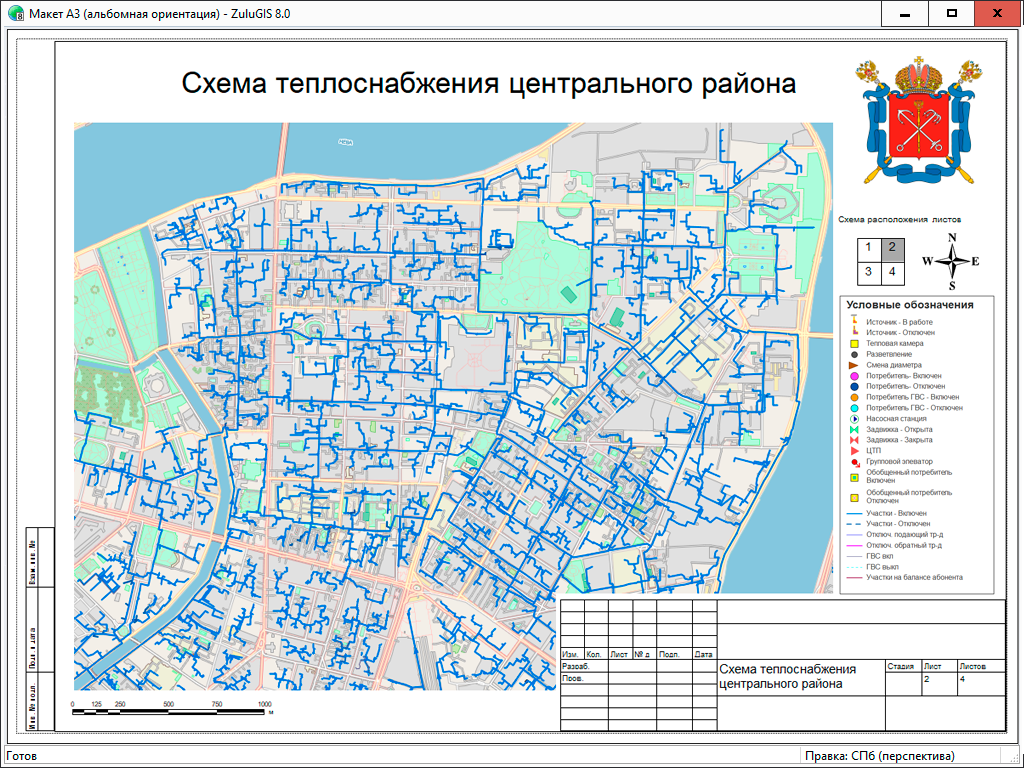 In addition to printing ZuluGIS maps based on print settings, you can also create print forms using print layouts.

With print layouts, users are able to put together print documents that include maps, texts and graphics. Layouts can be incorporated into Zulu maps, stored as separate layout files or converted into PDF.

ZuluGIS imports vector data from DXF (AutoCAD), Shape (ArcView), Mif/Mid (MapInfo), GeoJSON, KML (Google) and GIS data saved as a text file. In case of Shape, Mif, GeoJSON, KML and text, data is imported along with attribute databases, based on a geographical projection.

Moreover, you have the option to use ZuluGIS object model to create your own converter.

WMS and WMTS data is added to the system as special ZuluGIS layers (WMS and WMTS layers). These layers can be displayed on a map in various combinations with other layers.

Read how to add WMS and WMTS data to ZuluGIS here. 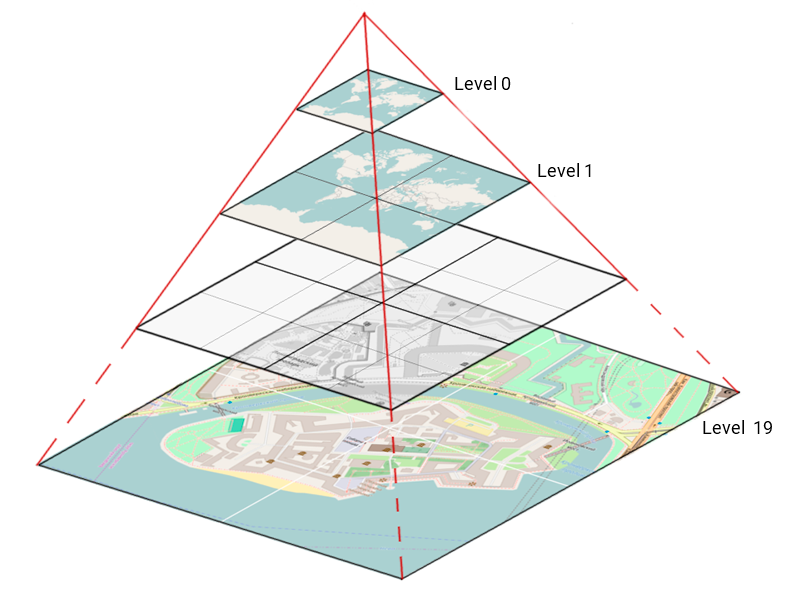 Many GIS servers, such as Google Maps, OpenStreetMaps, Wikimapia, Yandex.Maps, are able to offer mapping information as raster images cut into small parts – tiles. Together these tiles form an image of an entire territory at several fixed scales. All tiles at the same scale make up a level. That is, every tile at one level is represented by four tiles at the next level. The sum of all tiles at all levels constitutes a tile system. We have designed ZuluGIS system to work with both our extension modules and user-generated programs.

Plug-in architecture (additional embeddable modules or system extension modules) makes it possible to use ZuluGIS as a GIS platform (or GIS environment) for running other applications, something that we have already done with heat and water supply calculations. ZuluGIS also provides opportunity to create macros using Visual Basic Script (VBScript) and Java Script (Jscript) programming languages. For faster access, users can assign macros to new control buttons in the toolbar.

Employing the same object model, users can integrate working with our data into their own applications with the help of ZuluXTools GIS component library. 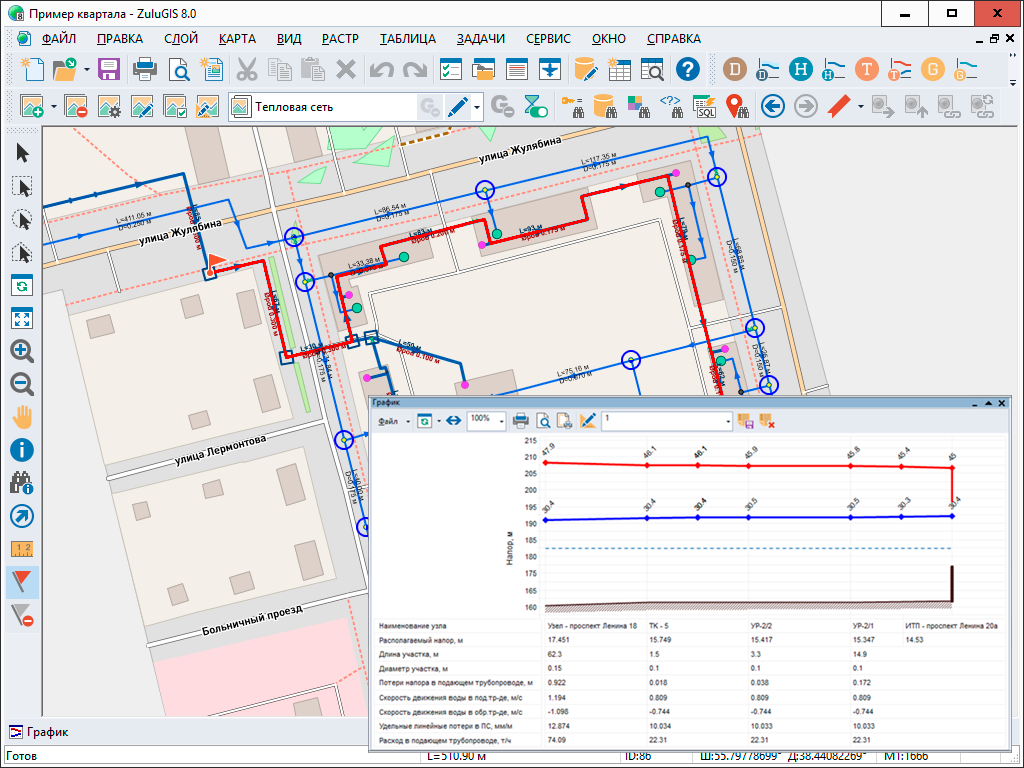 Our company has released ZuluGIS extension modules that include applications for hydraulic calculations for utility networks and a module for building piezometric graphs: